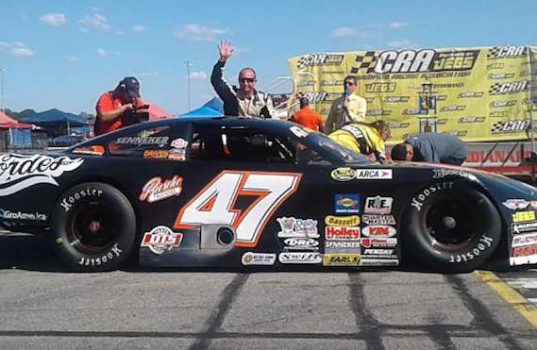 Campbell Scores Another Pair of Boxing Gloves in Indy

Brian Campbell won the Fall Brawl 100 for the JEGS/CRA All-Stars Tour at Lucas Oil Raceway in Indianapolis on Sunday, picking up yet another pair of boxing gloves on what was an unseasonably warm day.  Campbell inherited the lead on lap 53 after race-long leader Carson Hocevar dropped out with a broken fuel line, and never looked back on his way to the win.

“Very unfortunate for Carson (Hocevar), that was gonna be fun,” Campbell told Speed51.com powered by JEGS. “I knew there was gonna be a restart and I was just cruising there, matching his times and not wearing my stuff out, and I’m pretty sure he was doing the same thing too, so that was gonna be fun when it came to the end of it.  (Michael) Clancy was also matching our times too; it was gonna be a three-way race there, but it didn’t work out, kind of cruised around to victory.”

For Campbell, it was his third win in a row at the Fall Brawl and fourth win overall.  He also has a win in the Circle City 100 back in 2011.

“I think I’ve got four or five gloves,” Campbell stated.  “I think this is my first JEGS Fall Brawl, it’s been like eight years since I’ve driven a JEGS car or a crate car around here.  We’ve won this race a lot, this race is favorable to us I guess.  I’ve been coming to this place since I was a kid with my dad, so being able to race here way back here when I started, and being able to actually get a win, pretty good, pretty good fun.”

Season-long points leader Carson Hocevar led most of the first half of the race before a broken fuel line ended his day prematurely.

“It was really good.  KBR Development gave me a really good car,” Hocevar said, “We got up front really quick.  We were trying to save our tires.  But unfortunately, the fuel pump went bad and I couldn’t get fuel to the carburetor or something like that, but it took us out of contention.  It’s frustrating for sure but luckily we’re locked into the Chase, so we’re gonna get ready for Winchester.”

A caution flag flew early in the race for a Mandy Chick spin.  The race stayed green after that until Hocevar broke a fuel line and brought out the caution on Lap 53.  On the ensuing restart, Clancy made contact with the inside wall, ending his day.  Campbell would take off on the last restart and cruise to his second JEGS/CRA All-Stars Tour win of the year.

Battle Creek, Michigan’s Thomas Woodin had a good qualifying run on Saturday, and he backed it up with a career-best second place finish.

“Well, you know, we kind of struggled all weekend.  We changed the whole setup as soon as we got here,” Woodin said, “We started on the front row, but I didn’t get the start I wanted.  But after that, the car started coming to me and we got a couple lucky breaks on the restarts that helped put us in position going into those last thirty laps.  Since then, the car was just on a rail and I drove it as hard as I could, and when you’re chasing Brian Campbell, it’s a good day.”

The final race of the 2017 season for the JEGS/CRA All-Stars Tour is on Friday, October 6 at Winchester Speedway as part of the Winchester 400 weekend.  Carson Hocevar, Jack Dossey III, Austin Kunert, and Michael Clancy Jr will fight for the series championship.