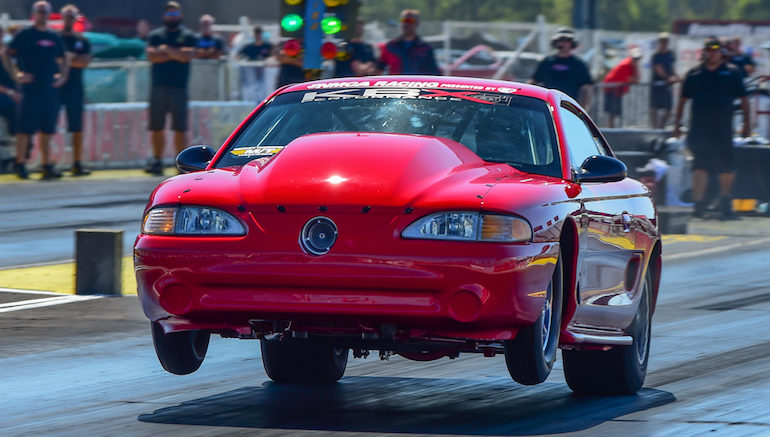 In VP Racing Fuels Xtreme Pro Mod, fourteen of sixteen drivers motored to 3-second elapsed-times in qualifying, and while Jason Hamstra led the field with a 3.83 in his Camaro, his loss in the second round paved the way to the final that featured Steve Summers and his Camaro and his Mark Luton and his Mustang. There, Summers secured the win with a 3.80 to Luton’s 3.92, and took a trip to the Aerospace Components Winner’s Circle.

Marty Stinnett muscled his Mustang to a 3.88 to set the pace in Mickey Thompson Radial Wars, but in the final, where both drivers were tight on the tree, DeWayne Mills pushed his Camaro to a 3.88 to win over Josh Klugger, who motored to a 3.97 in his Fox-body Mustang.

Rich Bruder drove to a 4.39 in Manny Buginga’s Mustang to lead VP Racing Fuels Street Outlaw qualifying, but the final round featured Daniel Pharris and Charlie Cooper in a pair of Mustangs. Pharris picked up the win with a 4.42 to Cooper’s 4.45.

Paul Roderick rocked an 8.27 in his Mustang to lead qualifying in Holley EFI Factory Super Cars, but going all the way were Cobra Jet drivers Chuck Watson and Gardner Stone, and Watson wheeled to the holeshot win with an 8.30 to Stone’s oh-so-close 8.29.

Andy Vogt drove to a 7.30 in his Trans Am to lead ARP Nitrous Pro Street qualifying, but the final round belonged to Joey Bucaro, who was in Don Baskin’s Cutlass, and Josh Ritli and his Camaro. Bucaro blasted to the win with a 7.34 to Ritli’s 7.58.

Jessie Coulter cruised his turbocharged Camaro to a 4.76 to lead Edelbrock Xtreme Street qualifying, and while he made it to the final, he ran into issues and wasn’t able to race Nick McGrath, who took the tree on a solo run and coasted down track in his Mustang for the win.

Kevin Lawrence landed a 7.16 in his Cobalt to set the pace in Dart Pro Stock and made it to the final, but he ran into issues and was not able to line up alongside Rob Pearce and his Studebaker. Pearce claimed the win with a 7.32-second pass.

Robbie Blankenship was on a rail in his Mustang and the result was a 7.95 to lead qualifying in Boninfante Racing NA 10.5. He remained a force through the final, where he flew to a 7.89 to claim the victory over Dwight Ausmus, who had him on the tree but was 7.97 on the top end.

Jesse Wilson wheeled Kelly Pierce’s Camaro to a 10.25 to lead Chevrolet Performance Stock presented by Scoggin-Dickey Parts Center qualifying, and he made it to the final round, where he had a remarkable race with Haley Rounsaval. Wilson ran a quicker 10.22, but Rounsaval rounded up the win with a 10.23 on a holeshot.

In the FSC Stock/Super Stock Combo, Ernie Neal earned the lead in qualifying by driving his Cavalier to a 9.55, but the final round belonged to Chris Stephenson and his Firebird and Doug Duell and his Barracuda. Stephenson earned the win in the double-breakout race with a 10.80 on his 10.81 dial to Duell’s 10.51 on his 10.54 dial.

Bruce Lang landed a 10.50 on his 10.50 index in his Barracuda to lead ATI Nostalgia Super Stock qualifying, but going all the way were Russ Berens and his Belvedere and Jeff Frees and his just-debuted Barracuda. In the double-breakout race, Berens won with a 9.73 on his 9.75, while Frees was 9.46 on his 9.50.

In MagnaFuel Open Comp, Jon Pickering, Sr. saw the tree to the tune of .001 in his Maverick to lead qualifying. During the final, though, Ricky Pennington pulled off the win with a 10.61 on his 10.60 dial in his Chevelle, while Susan Roush McClenaghan slowed to a 9.64 on her 9.55 dial in her Mustang.

Additionally, NMCA and the Victory Performance Nostalgia Super Stock series joined for the Nostalgia Super Stock All-Stars race presented by FueLab. Victory’s Jeff Blichensderfer took the win over the NMCA’s DW Hopkins by driving his Dart to an 11.00 on his 11.00 index, while Hopkins hot-shoed his Thunderbolt to a 9.51 on his 9.50 index.

Upon careful study of points after this riveting race, class champions will officially be declared, and a follow-up story will be posted on the NMCA Website. Then, champions and their crew members will be celebrated during the NMCA awards ceremony, December 8, at the Indiana Convention Center, in Indianapolis, Indiana.

A new year of NMCA action will spool up with the 16th Annual NMCA Muscle Car Mayhem, March 8-11, 2018 at Bradenton Motorsports Park in Florida.