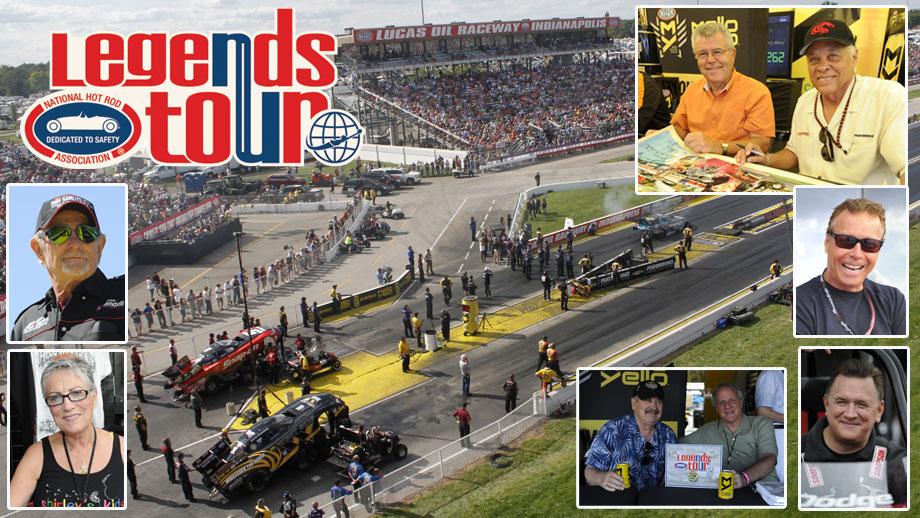 It serves as another thrilling aspect of the 2018 Chevrolet Performance U.S. Nationals, the race known as the Big Go featuring nearly 1,000 drivers competing across 12 categories with the goal of grabbing a coveted Wally trophy. The top drivers in Top Fuel, Funny Car, Pro Stock, and Pro Stock Motorcycle will all compete for their place in Indy history.  Steve Torrence (Top Fuel), J.R. Todd (Funny Car), Drew Skillman (Pro Stock), and Eddie Krawiec (Pro Stock Motorcycle) wrote their name in the history books as last year’s winners. This year’s Chevrolet Performance U.S. Nationals will be broadcast on the FOX national broadcast network and Fox Sports 1 (FS1), including a live broadcast of Monday’s finals on both FOX and FS1 on Sept. 3.

Don “The Snake” Prudhomme is regarded as one of the most popular and successful drivers in the sport’s illustrious history. Prudhomme claimed four Funny Car world championships in his career, becoming the first driver in the class to exceed the 250 mph barrier. His impact as a driver, team owner and personality in the sport in nearly unparalleled, and Prudhomme has had plenty of Indy success as well. He won the Chevrolet Performance U.S. Nationals three times in Top Fuel and another four times in Funny Car en route to 49 career victories between the two classes.

Ed “the Ace” McCulloch is a familiar name when it comes to success at the Chevrolet Performance U.S. Nationals. The legend won the race six times, including four times in Top Fuel. McCulloch’s impressive driving ability led to success in both Funny Car and Top Fuel, as he is one of only 16 drivers to have a win in both classes. In all, McCulloch finished with 22 career NHRA victories, and also served as a standout crew chief for the likes of current star Ron Capps.

Ranked No. 1 on NHRA’s Top 50 drivers list in 2000, “Big Daddy” Don Garlits is considered the father of drag racing. As innovative as he was successful, Top Fuel legend Garlits is responsible for an impressive amount of victories (35), historical runs, three Top Fuel world titles and a number of technological advancements. Garlits was the first racer to surpass the 200 and 250 mph marks in the sport, and his eight Chevrolet Performance U.S. Nationals victories are third-most in NHRA history behind Bob Glidden and Tony Schumacher, who won for the 10th time in 2016.

Shirley Muldowney remains one of the most successful drivers in Top Fuel history and a pioneer for female racing. She claimed the first of her 18 career victories in 1976, a historic moment in Columbus, Ohio where Muldowney became the first female winner in NHRA history. Muldowney won her first Top Fuel world championship in 1977, becoming the first female to do so, and then became the first Top Fuel driver in NHRA history to win two and then three world championships in the class (1980 and 1982), also winning the Chevrolet Performance U.S. Nationals in 1982.

Darrell Gwynn had an incredible start to his Top Fuel career, winning four races in his second season, battling with Garlits for the world title in 1986. Gwynn won another 13 races over the next three seasons, finishing second again in 1988, before tragedy struck in 1990. He won in Gainesville – his 18th career win – before a crash in an exhibition race left him paralyzed. The determined Gwynn met that challenge head-on, serving as a successful team owner and launching the Darrell Gwynn Foundation in 2002 as an organization dedicated to the cure of paralysis.

Tom Prock had a significant presence in drag racing as both a driver and crew chief. As a driver, Prock had success driving everything from gassers to Funny Cars, while he became a standout crew chief after retiring from driving, most notable for legendary racer Tom “The Mongoose” McEwen, who passed away a month ago. Prock’s son, Jimmy, has followed in his footsteps, putting together a championship tuning career working with legends like John Force.

Terry Vance is one of the pioneers of Pro Stock Motorcycle, winning 24 NHRA national events in a career that also included a number of motorcycle drag racing championships. He also formed Vance and Hines with partner Byron Hines in 1980, a name and company now synonymous with Pro Stock Motorcycle success. The company has been a championship powerhouse for decades, including a combined nine world titles from current riders Andrew Hines and Eddie Krawiec.

The NHRA Legends Tour during the Chevrolet Performance U.S. Nationals will feature meet-and-greets, autograph sessions, and a variety of other activities.