RT EPISODE 1: The Rise, Fall, and Return of Dustin Richardson 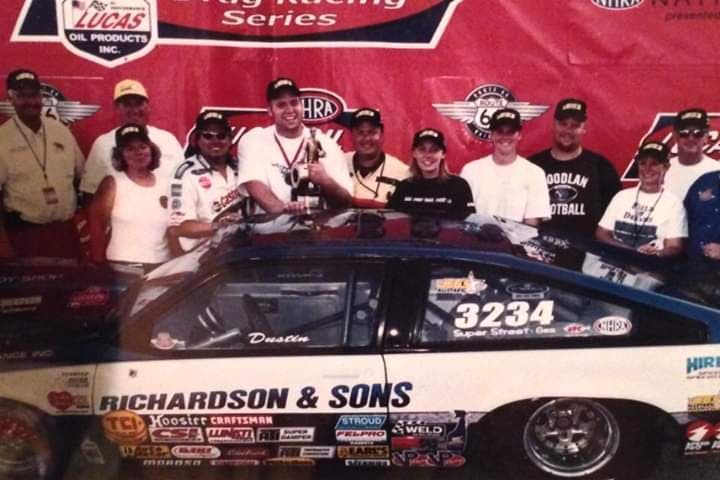 INDIANAPOLIS, Ind.—The rise and fall of an individual is a story that has been told thousands of times. It almost always begins with promise and hopes for a bright future. It almost always ends with the downfall of a once-great hero or future star.

Dustin Richardson’s story did begin with promise. He did endure a free fall in his personal life. But the end of his story is yet to be told.

Talk about a bright future. A proven champion drag racer, Richardson was also a high school star on the gridiron. He was an all-state performer. He had plenty of opportunities to compete at the collegiate level. Richardson chose drag racing.

“I met a woman, was married really young and had a baby really young,” Richardson said of how his personal life changed after high school. “Right around that time, I also wrecked a car and broke my back. I was prescribed pills, and that became an ongoing deal.”

Then the downfall came. Richardson describes the next phase of his life as “15-years of hell”.

First, it was prescription pills. Then Richardson moved to smoking marijuana. That led to Richardson losing his wife and home. He was living in his truck. The two-time Super Street Champion in the “Land of the Winners” was homeless. The free fall did not stop.

“I was smoking crack; I was snorting heroin; I was doing everything I could possibly do,” Richardson said. “I was the worst of the worst when it comes to drug addicts.”

Rock bottom is a phrase that describes the lowest point in an individual’s life. That point is different for everyone. For Richardson, the loss of his family was not rock bottom. Nor was being homeless. Rock bottom for Dustin Richardson was stealing his mother’s medication and jewelry while she battled cancer. Rose Richards battled cancer for six years.

“I would steal her pills,” Dustin said. “I took her jewelry that she got when she had cancer. My dad got her a special cross, and I took it. I pawned it for $100 to get heroin.”

The Richardson’s are a racing family. Dustin and his brother, Bryan, both race. Their parents, Paul and Rose, have also spent plenty of time in the driver’s seat of a race car. Without his parents, Dustin would never have been a successful drag racer. It was his admiration for them that finally helped him reach rock bottom.

“I come from a good family, and I had an awesome upbringing,” Dustin said of the role his parents played in his racing career. “Division champion. I had that opportunity, not by my doing. That was my mom and dad.”

It was seeing the hurt he caused his mom and dad that forced him to reach his rock bottom. Rose was fighting for her life while Dustin took her medication and jewelry. That feeling was enough for Dustin. He was ready to turn things around. It was time to get clean and turn his life around for himself and his family.

Dustin set out for Our Masters Camp, a rehab facility operated by Providence Recovery Place in the foothills of Tennessee. After the first visit, Dustin failed to maintain his sobriety. He went back again but still struggled to stay clean. On the third visit, something clicked. He committed to staying sober nearly three years ago, and he did.

But that was not the end of his struggles.

On January 9, 2019, Dustin was hit by a drunk driver going the wrong way on Indiana 930. The driver had a blood-alcohol level of 0.328%, more than four times the legal limit in the state of Indiana. Dustin was found pinned inside his truck with medics only able to reach the upper part of his body. From his abdomen down, he was covered by the dashboard.

His left femur: shattered. Right ankle: twisted 180-degrees and shattered. Pelvis: broken in seven locations. Add three broken ribs plus a ruptured spleen, and Dustin was now on a long road to a different type of recovery.

“It’s the best thing to ever happen to me in my entire life,” Dustin said of the accident. “There’s a thing we call in all the circles called a ‘dry drunk’ which is someone who’s not drinking but still acting the same way with character defects. That first couple of years, I was sober, but I was not a nice person. I had not had a change of heart.”

That change of heart came after the accident. With rods holding together his lower body, Dustin has maintained his sobriety since the third trip to rehab despite the grueling physical recovery from his accident. The physical pain he experiences every day serves as a reminder of what he’s working to achieve.

“It showed me God’s love through anything,” Dustin said of how the accident motivated him. “A lot of relationships were healed. Things with my parents that may never have been healed were healed after that. God did so many things for me through [the accident].”

Dustin is engaged to “the woman of [his] dreams,” active in his children’s lives, and is once again a part of the all-American drag racing family. A happy ending to a story that nearly ended in tragedy so many times. Still, Dustin is not ready for the story to end.

“To us, racing is everything; it’s our heart; it’s our soul,” Dustin said of his return to drag racing. “It’s being with our parents and the relationships. It’s the loading up on Thursday and mom being crabby because she doesn’t have her list done. It’s having a family talk on the way there. It’s so much more than getting in a race car and going down the track for us.”

When Dustin was one month old, his father, Paul, purchased a 1987 Oldsmobile Firenza It’s been with the family for 35 years. In late May of 2020, despite all odds, Dustin made his triumphant return to the track for the first time in seven years, racing his father’s Firenza.

Making that first pass after so many years was a milestone in the Dustin Richardson comeback story. No one knows quite how it will end, but Dustin has a pretty good ending in mind.

“The comeback for me is to have a loving family, a loving wife, and to be on that stage in California with a big trophy telling them thank you.”

Lucas Oil Raceway is an auto racing facility in Brownsburg, Indiana about 10 miles west of Downtown Indianapolis. It includes a 0.686-mile (1.104 km) oval track, a 2.5-mile (4.0 km) road course, and a 4,400-foot drag strip which is among the premier drag racing venues in the world.

The Racers’ Tribune is a series of features detailing the incredible lives of racers from around Hendricks Country, the state of Indiana, and the Midwest. Every racer has a story. Some stories are exciting. Others are funny or sad, but each racer has one. Let Lucas Oil Raceway tell your story. If you have a story to tell or know someone who does, submit the story HERE to be highlighted in the Racers’ Tribune.