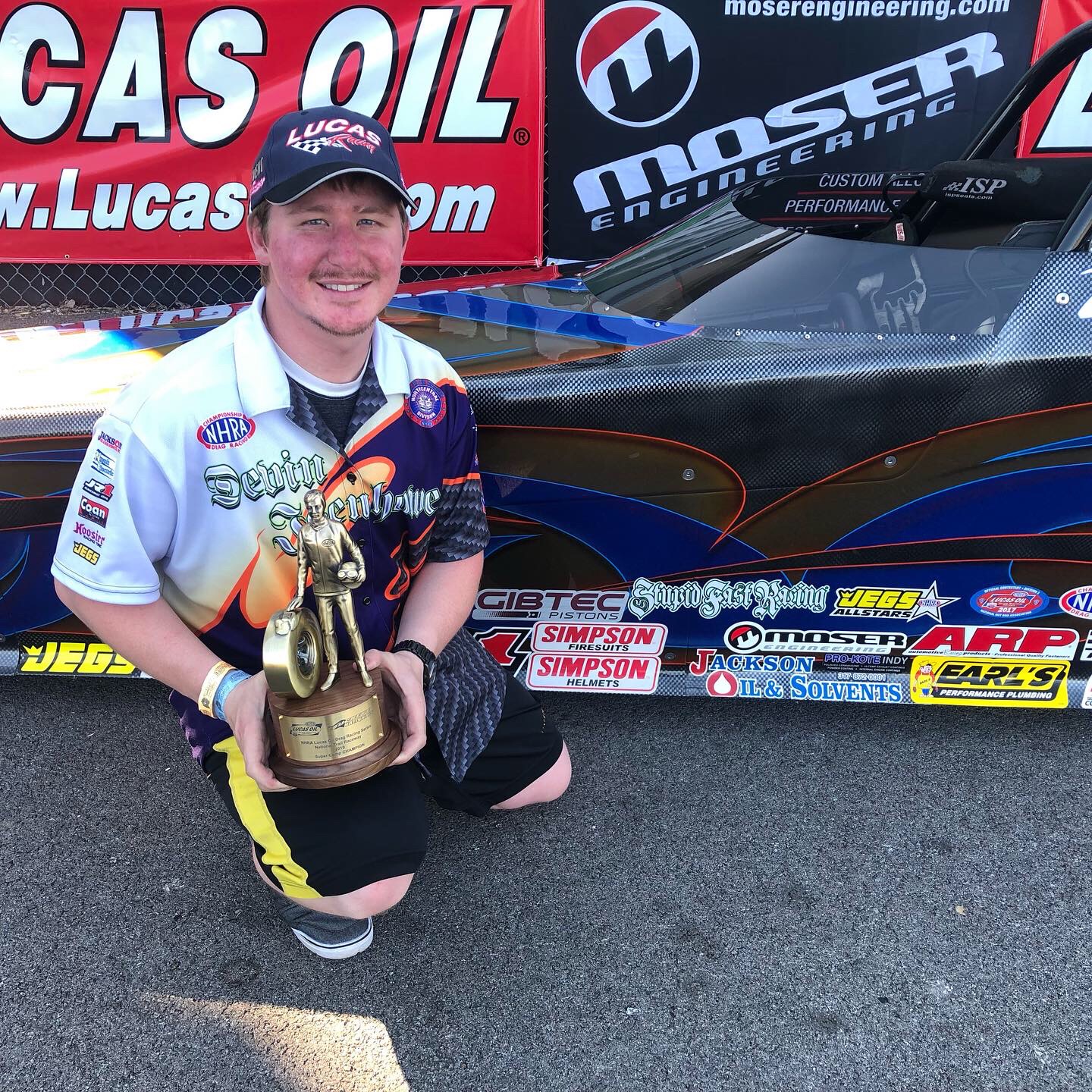 INDIANAPOLIS, Ind.—The National Hot Rod Association (NHRA) is divided into seven divisions at the sportsman level. Racers compete within those divisions for championships and other perks like trips to national events. Division 3 (North Central Division) has produced a long list of championship drag racers. That list includes the name Devin Isenhower.

As with most sports, the best-of-the-best are typically those with decades of practice and experience. What Isenhower has accomplished at just 23 years old rivals that of some of the most experienced drivers in Division 3. He does have plenty of experience having been in a dragster for more than a decade, specifically as a junior at Lucas Oil Raceway.

“I’ve been racing here (Lucas Oil Raceway) since I was nine-years-old,” Isenhower said of his early drag racing career. “I started in the junior dragster ranks and did that all the way up until I was 18. Then I hopped in the big cars, and I’ve been doing that ever since.”

Isenhower credits his junior dragster career for getting him the experience he needed to be successful as an adult. He was able to master the fundamentals and different racing strategies that resulted in a strong junior career. As his 18th birthday approached, Isenhower was ready for the next level.

Once he turned 18, Isenhower stepped into a 250-inch American Dragster with a 632 cubic inch big-block Chevy engine, which he races in Super Pro and Super Comp classes. Once his father decided to step away from racing and focus on his role as crew chief, Devin also stepped into his father’s 1967 Camaro Roadster with a 615 cubic inch big-block Chevy engine that he races in Super Gas.

“My first year of racing big cars, it was more here locally and getting my feet wet,” Isenhower said. “The following year, we started to run the Division 3 series, and I actually won the Super Gas Championship.”

Division 3 is the “Land of the Winners,” and in his first season racing at the division level, Isenhower was already a winner in a big way. With Devin in the driver’s seat and his dad tuning the car, the Isenhower family decided to chase a national championship in 2018.

Some racers can go decades or an entire career without a division title. In just three seasons after turning 18-years-old, Isenhower was a two-time Division 3 Super Gas Champion and a Lucas Oil Drag Racing Series Super Gas National Champion.

His national championship defense fell short in 2019, and now, in the short 2020 season, Isenhower will begin to focus on new responsibilities. He recently graduated from Indiana University-Purdue University Indianapolis and started a career as a Product Engineer, his first full-time job other than drag racing.

As if Devin’s career wasn’t impressive enough, he was a two-time Division 3 Champion and a Lucas Oil Drag Racing Series Champion while pursuing a college degree in mechanical engineering. Stepping away from some of the national and division events, you may still see Devin at some local races. He is likely to keep an eye on the big-money bracket races and could compete in some of those races in the future.

Isenhower did not get to this point alone. A lot goes into making a successful career of any kind, and Devin’s family has played a vital role in his success.

Racing alongside him at the junior ranks was his brother, Nick. After Nick finished his junior career, he stepped away from drag racing before making his return in a Super Comp dragster this season. Nick even picked up a win during a preseason bracket race at Lucas Oil Raceway in late May. At a certain point, Devin’s father decided to step away from his racing career after finding more joy in crewing Devin and his race cars. You are sure to find Devin’s mother not far behind the vehicle watching the rest of the family work.

Entering semi-retirement at the ripe old age of 23, Isenhower has already accomplished a career worth of wins and championships. What’s his advice for the current junior racers looking to make an immediate splash on the national stage?

“You can beat a lot of people before you get to the track,” Isenhower said, offering advice to current junior racers. “If you can have good equipment that you can trust, you can work on, and you can follow, that gives you a great advantage.”

That’s coming from one of the best racers in the “Land of the Winners.”