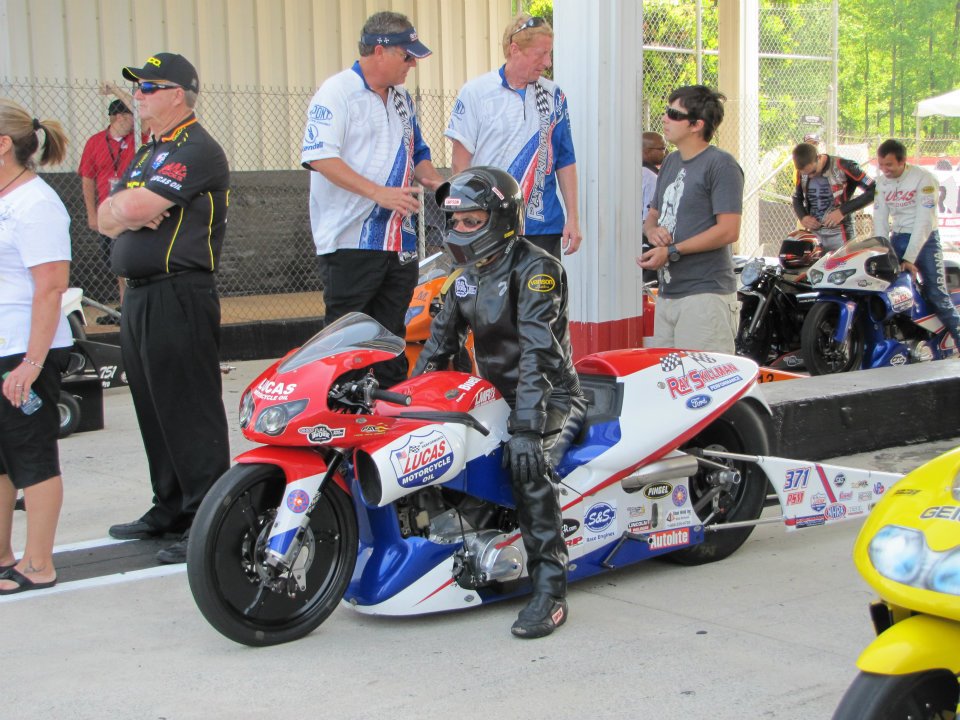 INDIANAPOLIS, Ind—Wes Wells is a name that most racers in the Lucas Oil Raceway Brown’s Oil ET Bracket Series presented by Comfort Suites will recognize. A current regular at the track, for more than a decade, Wells was also a regular on the NHRA Mello Yello Drag Racing Series.

He races in the bike class and has a Ray Skillman sponsored dragster that he runs in the bracket series and other local events. Most of his opponents are unaware of his complete drag racing career.

“I had won the E.T. Finals in 1993, 1994, and 1995,” Wells said of his decision to make the jump to the Pro Stock Motorcycle ranks. “I guess my head swelled a little and I thought I was as smart as these other guys. It turns out those guys are pretty smart, and they are pretty good riders.”

It took about three years for Wells to get to the point of competition in the highest bike class the NHRA has to offer. By the time he was able to put a bike together, understand the equipment and programs, and obtain all the necessary licenses, Wells was ready for his first national event in time for the 2000 NHRA season.

“At first, I was really nervous,” Wells said of his early days racing Pro Stock Motorcycle. “I remember the first pass; I went out and made the mistake of looking out into the stands. All these people are there and I had to put my head down and really focus on what I was there to do. After that, I learned not to look in the stands.”

Just because Wells was racing in the professional ranks does not mean he had a similar experience as Andrew Hines, Antron Brown, Angelle Sampey, or any of the other top bike racers at that time. Some teams were spending more than $500,000 dollars to run a Pro Stock Motorcycle season while Wells was spending a fraction of that.

There are even stories of frustrated pro racers that were not thrilled with having to park next to Wells at national events. It would be an interesting sight to see Wells, his trailer, and lawn chairs parked next to a team with multiple bikes, multiple rigs, and hospitality set up. Even without the same resources, Wells still found a way to compete.

“I was pretty decent in 2008 and 2009,” Wells said of his later years racing national events. “I qualified for eight out of 10 races in 2009 and won some rounds. I was having quite a bit of luck and it was really neat because I was spending maybe $30,000 with Ray Skillman’s help.”

Something that most racers do not get is a behind the scenes look at how racers interact when they are not on the bike racing each other. The bracket racing community is a close one, almost like an extended family for some. Competition is important, but those racers spend the entire season around each other at race tracks. There is a sense of community.

The interactions are not all that different in the professional ranks.

“I met a guy named Pete Briggs and he was the only other one driving a Kawasaki at the time,” Wells said of his early friendships made with other drivers. “I went up to him and asked for some pointers and the guy bent over backward to help me. We ended up being great friends.”

After 12 seasons racing Pro Stock Motorcycle, the decision was made to step away from national events. It did not mean the end of Wells’ racing career. Now, just shy of a decade after his last national event, Wells is one of the most competitive bracket racers at Lucas Oil Raceway.

Currently, he is the defending Millennium Trailers Bike class champion. With a ladder set to determine the 2020 champion, Wells is set to be the top seed at the track championships on October 24. He has made plenty of appearances in the Lucas Oil Raceway winner’s circle in both his bike and dragster and shows no signs of slowing down and views bracket racing as a similar challenge to racing on the pro series.

“Bracket racing is just as tough as what the pro guys do,” Wells said of bracket racing. “Especially nowadays, in Super Pro people monitor transmission pressure and temperature, they are changing converters. These cars are deadly now and you have to run your number.”

There is always one question that a once professional in sports are asked more than any other question. While not retired, Wells is no longer competing at the professional level. He never won a national event and spent a lot of money to race. He only competed for 12 seasons and it has been nearly a decade since his last Pro Stock Motorcycle race.

But does he miss it?

“Stop breathing. See if you miss it.”