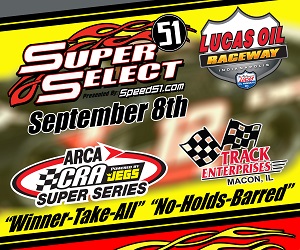 The second round of invitees for the Speed51 Super Select “Winner-Take-All” at Lucas Oil Raceway (IN) have been announced.  On Friday, Speed51.com and Track Enterprises officials revealed six new drivers who will have the chance to race for a minimum of $10,000 on Saturday, September 8.

“It’s great to see the list of invitees grow,” said Track Enterprises Operations Manager Adam Mackey.  “There is a lot of excitement just from last year’s big-race winners, now it will be fun watching others add their names as the 2018 season progresses.”

The newest list of invitees includes a half dozen winners of some of the biggest Super Late Model races in the country. The current list of drivers, which will be referred to as the “Select Team,” can be seen below:

This latest list of invitees will be the final group of 2017 big-race winners invited to compete in the race.  From here, Speed51.com and Track Enterprises will begin inviting winners from the 2018 racing season.

Each invitee from the Select Team that accepts their invitation prior to March 19, 2018 will receive a guaranteed starting spot in the race on Saturday, September 8 during Brickyard 400 weekend.  Those who accept the invitation will also receive free entry into the race and one set of free tires to use during the race.

Additionally, Speed51.com will produce video features on each driver that accepts their invitation to compete in the Speed51 Super Select.

Rising star Harrison Burton and 2017 Summer Showdown winner Preston Peltier were the first two drivers to accept an invite to compete in the race.

The Speed51 Super Select will be hosted by Track Enterprises and sanctioned by the Champion Racing Association (CRA).  A pair of features will be contested that evening, one for the Super Late Models and a 100-lap race for the USAC Silver Crown Series.  The winner of the Super Late Model race will have a chance to win at least $10,000.

There will also be a 50-lap Super Late Model race that will be open to all drivers to compete in.  That race will transfer more drivers into the Super Select field.

More information regarding the format of the race will be announced in the future.

Stay tuned to Speed51.com for more details on the event.