RT EPISODE 4: A Dodge Challenger Was All it Took 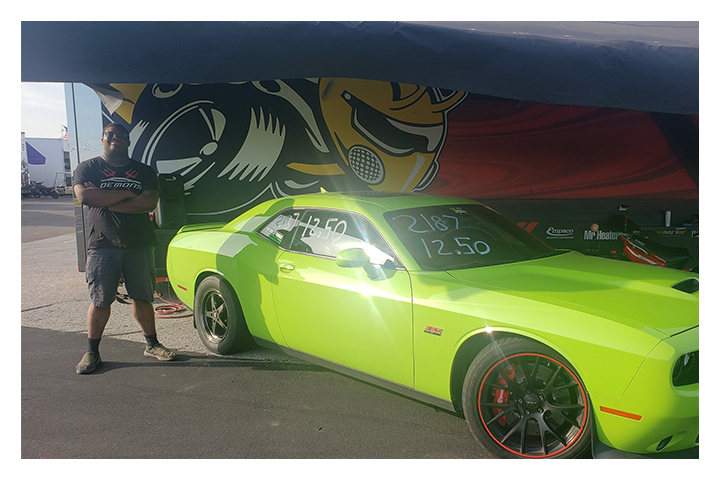 INDIANAPOLIS, Ind.—A basketball is meant to go through a hoop. Baseball bats are made to be swung. You are supposed to kick a soccer ball. These are obvious facts that do not have to be explained. No one had to explain what Nathanael Stoners’ first Dodge Challenger was supposed to do when he made the purchase.

Most drag racers grow up around the sport. Maybe their parents are racers, or they started in the junior dragster ranks. Stoner did not grow up around cars and did not even take the tree until his early-20’s. A software tester for the State of Indiana, Stoner found the sport of drag racing around three years ago.

“A few years back, I got my first Dodge Challenger,” Stoner said of how he became interested in drag racing. “The thing that doomed me in the car was the legroom because I am 6’4″ and there are not a lot of cars I can fit. Then I found out quickly that they are really fun cars, so I decided I wanted to take it out to the track.”

One of the first events Stoner brought his first Challenger to was Wild Wednesday. On select Wednesday evenings throughout the season, racers can participate in the Lucas Oil Raceway Wild Wednesday test-and-tune program. The event is open to any vehicles that mean NHRA tech guidelines including daily drivers, dragsters, bikes, and more.

Stoner had a fast car and he knew that it was supposed to go fast. Bringing it to Wild Wednesday would help him figure out how fast it could really go. It was not as easy as just showing up and racing for Stoner.

“There was a lot of trial-and-error, to begin with,” Stoner said of his learning curve to understand the sport. “When I started out, I did not even know how to stage or how the lights worked. Then you get more advanced and you learn how things like density altitude affect how quick a car runs and all these other little things.”

After a few passes down the track, Stoner began to come to a few realizations.

Drag racing was for him. Sure, he had a ways to go but Stoner was eager to learn more about the sport. He also realized you didn’t have to have the most powerful car to compete and win a race. Bracket racing would allow Stoner to race competitively without a true race car. Most importantly, Stoner realized he is a “Challenger guy.”

“I have a 2015 Dodge Challenger SRT 392, sublime green, 485 horsepower to the crank, and I have a set of drag radials on it,” Stoner said describing his new car. “It launches so much harder than my last car, it is like a roller coaster ride. I have a dashcam and I recorded my reaction to my first time down the track with it. There were a few choice words I cannot repeat here, but I was pumped.”

Now a regular at Lucas Oil Raceway on Wednesday nights, Stoner finished his first season in the Brown’s Oil Service ET Bracket Series presented by Comfort Suites in 2019. He finished 12th in the Allgaier Performance Parts Sportsman class out of nearly 50 competitors.

After diving into the sport enthusiastically, it did not take long for Stoner to become a full-fledged of the racing community.

“I have a lot of good friends that hang out here at the track,” Stoner said of how he’s learned about cars and racing. “There’s a lot of people that have helped me out. The nice thing is people in drag racing are super friendly, super accepting, and super friendly to new people.”

Stoner may have gotten a late start to drag racing, compared to most, but he is no less enthusiastic. He rarely misses a Wild Wednesday and do not be surprised if he makes a jump up the bracket series standings in 2020.