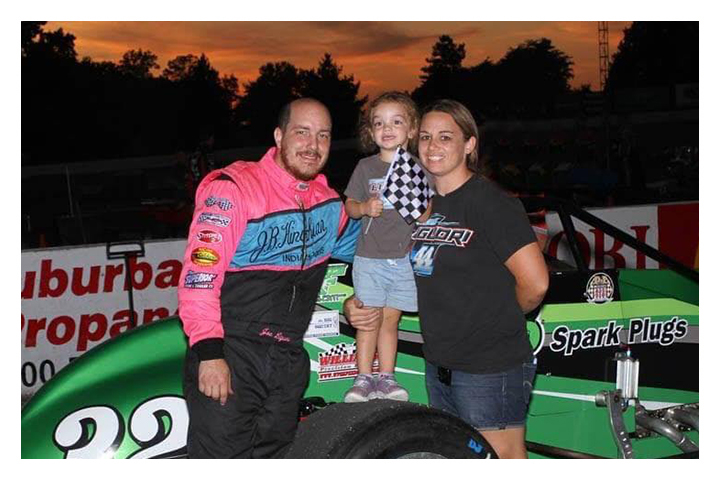 INDIANAPOLIS, Ind.—No one could have predicted back in January that 2020 would one of the most eventful in recent memory. Through early-October, we have experienced global pandemics, social justice movements, and political turmoil not seen in decades. It seems like those face been the least of Joe Liguori’s concerns this year.

Liguori’s racing career began in go-karts before he made the jump to midgets at 14. He raced around Indiana and his native Tampa, Florida through his teenage years. The day prior to his school graduation, Liguori was racing in Indiana. He flew back in time to walk at graduation before moving to Indiana the next day to pursue his racing career.

Much of Liguori’s racing career can be credited to his grandfather, Ralph Liguori.

“My grandfather started racing in 1949,” Liguori said of his family’s racing background. “He went through the war and grew up in the Bronx. He saw some stock car racing and said ’I am going to go do this.’ The very first race, he went out and spent $40 om the car and won $60 so he thought he could make a living do it.”

Ralph owns the most attempts to qualify for the Indianapolis 500 and never make the field. The open-wheel fan-favorite owns the 50-lap sprint car speed record on a dirt mile when he averaged 104 miles per hour. Racing until 2000, Ralph finally retired at the age of 74. Just six years early, he won a regional midget race at the Indianapolis Speedrome which made him the oldest racer ever to win a USAC feature.

Thanks to his grandfather, the entire Liguori family became involved in the racing world. Joe’s dad and uncles were involved in motocross. There wasn’t much hesitation when it came to Joe when he became old enough to race.

“I’ve won some regional midget races but nothing huge,” Liguori said of his racing resume. “I have won several local dirt sprint car events. Some of my bigger wins came in the Ford Focus midget division. In 2009 and 2010, we won the Midwest Championship and were the highest point man in the country.”

The thing about the racing community is that everyone knows everyone, and they are more like family than friends. Joe’s wife, Lynsey, is a former racer. They raced against each other on multiple occasions before and after they were married. The pair are the only spouses to make the feature at the Rumble in Fort Wayne as well as the first husband and wife to wreck each other in the event.

That tight-knit racing community may have been what helped the Liguori family power through 2020.

“In January, I lost a good friend of mine, Wally Sexton,” Liguori described how is 2020 started. “He was a mechanic of mine and had a lot of health issues. We moved on and come April 15, we had a house fire. The whole garage burned down from an electrical fire and the whole house was smoke damage. We had to take it down to the studs. Then my grandfather passes away.”

All of this happened for Joe and his family during a time when most of the world was worried about public health, job security, and how they were going to pay their bills. For a time, nearly the entire world was locked down to the point of not being able to leave your home. The Liguori family no longer had a home to stay in.

You would never know, that Joe and his family have had one of the worst years imaginable. He has found a way to keep pushing through and does it with a smile or a laugh because as bad as 2020 has been, it could always be worse.

“There are still a lot of goods,” Joe said of how he stays motivated. “Between my daughter, my wife, and my mother-in-law lives with us. She was actually there with my daughter when the fire happened. She was able to get here and the dogs out where no one was hurt. It was a large bad, but there were goods to it.”

None of the 2020 setbacks kept Joe from racing. The fire claimed his house, but his shop was still standings out back. This winter, he plans to build a non-wing sprint to build on both his wing and non-wing programs in 2021. Along with a few silver crown races, Liguori plans to make plenty of local appearances next year.

“Hopefully, in 2021, things return to normal,” Joe said of his plans. “We will get back to our regularly scheduled programs.”